Lucy Maynard and I both worked at Brathay Trust a national charity that supports the wellbeing of young people. We both worked there as youth development trainers and as researchers. Lucy is still there as Head of Research and I now support students to support young people’s wellbeing at the University of Cumbria.

Working at Brathay sparked our curiosity into practice. What did we do with young people? How did it work? Why did it work? What changes happened? How could we make it even better? … we wondered.

And so the empowerment process and wider wellbeing and social justice framework was born. From our practice experience, from years of study, from talking to many practitioners and young people.

We were so keen to tell other people about it we even wrote a book: 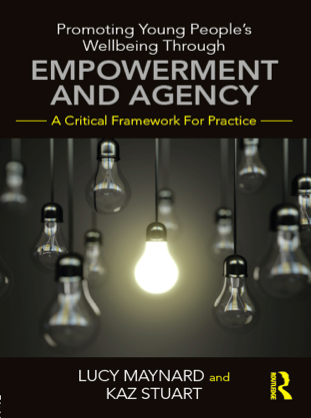 This work is the foundation of this blog, so read on!

Here I explain the central part of our model, created by Lucy through years of PhD study, the empowerment process.

We started thinking about what we did as some sort of empowerment. We knew that we could not just give our power to young people, that they had to claim it for themselves, but we figured we probably created the conditions for empowerment to happen, we were enablers of empowerment. By empowerment we meant:
“Helping people gain greater control of their lives and circumstances….” (Thompson, 2007)”… in order to maximize the quality of their lives” (Adams, 2008.)

One young man’s story was particularly helpful in the development of the model. We will call him Joe.

When we first came across Joe he said:
Me upbringing; I had a bad-un. I think it was just what I was used to, so as I got older I didn’t know different. I knew now’t else and then when you start, like I knew I was in the wrong at 13 and stuff, but that was the lifestyle I was in.
Like from a young age, I used to tick school at like five! And my Dad wasn’t a very good role model, because you always wanna be like your Dad. But my Dad was in and out of jail, till I was about 11. So from a young age I was taking all that in. Like I’d be in a room with like me Mam, me Dad and all their friends and they were drinking and taking drugs, so that was what I was used to.
I was 12 [when I first got in trouble with the police] I set a bin on fire in the middle of the street. But I can remember as young as six being took home by the police, when I lived with my Mam and Dad, so… But [Grandad] went awol; give us a couple of slaps. He was strict but I didn’t listen to him.

Lucy worked out that this was a stage of reaction – the first stage of the process of empowerment. This involves young people operating from fight, flight or freeze governed by their ‘amygdala response’. This meant that they could not think properly in the moment. These responses were also often patterned or conditioned.

After Joe worked with Brathay for a while he said:
I had a light bulb moment; what am I doing, I need to change, I’m going nowhere
I thought I don’t want any more of this. And that turned into another one [light bulb moment]

Lucy figured out that this was a phase of sparking. Other people call these moments:
Interruptions (Coleman, 2007)
Critical moments (Henderson et al., 2007)
Epiphanies (Denzin, 1989)
Turning points (Mandlebaum,1973)
Breaks (Humphrey, 1993)
Fateful moments (Giddens,1991)
They are the times when we think, oh my, I want something different! or, oh my, I don’t want that to happen!

My sparking moments are usually prompted by getting on the scales!

Something had changed for Joe and he now thought that things could change, this was a huge realisation for him. he said:
I thought I’d had enough and was being good for quite a while and then the [programme] came along and I done it and got stuck in so I could be different. . Realisations are important as: “People lack insight into the way in which their social conditions undermine their well-being and therefore do not see their own actions as capable of changing their conditions”(Campbell and MacPhail, 2002). A lack of consciousness is therefore part of people’s oppression, a tool that keeps people stuck in an unjust situation hence the importance that Paulo Freire placed on developing critical consciousness (Freire, 1973).

At this point in time Joe started to also really want the change to happen – this wasn’t true for all the other participants on the programme, but thankfully it was for Joe:
I think there was only me that really wanted to change on the course
But the other guys, they were probably in that stage in their life where they didn’t want to change
So if they wanted to change the help was there. Just take the help, but they obviously didn’t want it and it wasn’t the right time for them.
It was right for me, I really wanted it.
Joe had reached a tipping point (Gladwell, 2000) where he developed an intrinsic desire for change and found his internal locus of control (Rotter, 1966), learning what was and was not under his control.

At this point Joe was all in, he was really fully committed to making the change. As he says:
I think I committed to changing, all together. But growing up as well, that was a big change. I know now I am in control, but there is always this little thing in the back of my head saying I could always go back and do something silly and make a stupid mistake. So that’s why I wanted to get away as well. I was just a teenage boy who thought life will sort itself out. But, you have to sort it out yourself.

Having committed, Joe was then hungry for the skills that would help him attain his goals. He took whatever support was on hand to help him sustain change. The staff at Brathay gave him what they could:
Skills, knowledge, understanding, self-confidence, self-efficacy, self-esteem, motivation and determination, and the ability to reflect and learn to learn.

Things didn’t always go well for Joe, just as they don’t always go well for me when I go on a diet or join a gymn. There were several ups and downs. On one occasion he said: I was doing the programme and then this time last year, [laugh] it was [festival], I had a bit too much to drink and I got locked up, for fighting, but luckily, I didn’t get prosecuted or ‘owt. So I thought right, I’m gonna have to change. I’m gonna have to use everything I’ve learnt from the programme and put it into action here and just go for it.

Lucy called this stage recycling as it seemed a more positive term than some of the others we heard. Other people called it ‘failing’, ‘setbacks’, ‘falling off the wagon’, or ‘relapsing’ (DiClemente and Prochaska, 1999). Sure Joe has messed up and returned to an earlier stage, but he was not the same person, he was reactive with more awareness, and this helped him speed through the cycle more quickly each time.

This process of empowerment is shown in the diagram below:

The next blog will explain how the process of empowerment links into structure and agency, and then wellbeing and social justice – keep tuned!

I am a Professor of Social and Health Inequality and Director of the Centre for Research in Health and Society at the University of Cumbria where I lead research into inequalities locally, nationally and globally. I am passionate about critical pedagogy, empowerment and agency and how they contribute to wellbeing and social justice. To that end I strive towards and support others to develop asset-balanced and person-centred, critically pedagogical practice – quite a mouthful! I also pursue interests in relational leadership, collaborative practice and small acts of leadership. Methodologically I am predominantly a qualitative researcher interested in socially just and authentic methods that enable people to contribute the most. I have a keen interest in evidencing the impact of youth work in ways that contribute to the young person as much as the organisation supporting them, and I work closely with Brathay Trust, the North West Regional Impact Hub for the Centre of Youth Impact. My professional background includes primary, secondary and higher education teaching, youth work, social care, outdoor education, research and higher education all as a practitioner, manager and leader. This experience led to my passion for wellbeing and social justice on a global, national and local scale. This blog is my small attempt to support change in these arenas by sharing evidence and my views in order to increase critical consciousness and leverage action. View all posts by wellbeingandsocialjustice